On May 12, 2016, El Museo Del Barrio hosted their 23rd annual gala. This year the institution was honoring two of fashion and art’s iconic figures, Isabel and Ruben Toledo and MAC Cosmetics. Hosted by gala co-chairs Maria Eugenia Maury, William H. Haseltine and Fashion Designer, Narciso Rodriguez the event drew over 400 guests from the fashion and art world that also included luminaries, philanthropists and collectors. For this grand evening, the source of inspiration came from the late Puerto Rican fashion illustrator Antonio Lopez whose much-anticipated solo exhibition ‘Future Funk Fashion’ will be on display at the Museo Del Barrio beginning June 14 – November 26 (stay tuned for as One Style at a Time brings you a full review of the exhibit this summer).

El Museo’s black tie gala was held at the famous Plaza Hotel in New York City and guests dined in the Grand Ballroom in a room full of glamorous splendor. The Board Chair Maria Eugenia Maury and Executive Director Jorge Daniel Veneciano took to the podium to welcome guests and thanked everyone for their attendance. Veneciano added, “As we face a nation increasingly Latin American, it becomes our responsibility to build a museum that embodies that reality”. Iconic model Pat Cleveland presented MAC Cosmetics Creative Director, James Gager with the award for Corporate Excellence In The Arts. Finally, actress Debi Mazar had the honor of presenting her longtime friends Ruben and Isabel Toledo with the award for Excellence In The Arts. Isabel said, “I really would like to thank El Museo for recognizing our artistic vision and artistic heart as a sharing artist couple.” Ruben added, “El Museo understands that art is the language of the soul, This is something we take seriously. We thank you all for supporting El Muso and for helping to shape the next generation of art.” The gala raised well over $850,000 which supports exhibitions and educational programming initiatives. The dinner ended with a festive performance by legendary voguing house, House of Xtravaganza. The evening concluded with an after-party in The Terrace Room which was transformed into an 80s themed club with sultry red glowing lights. The atmosphere perfectly referenced the “Antonio Era” with disco music. The fashion was sophisticated at this cultural fund-raising extravaganza. Model Pat Cleveland wore Zac Posen, honoree Isabel Toledo brought her love to the red carpet wearing a beautiful maroon heart patterned dress. 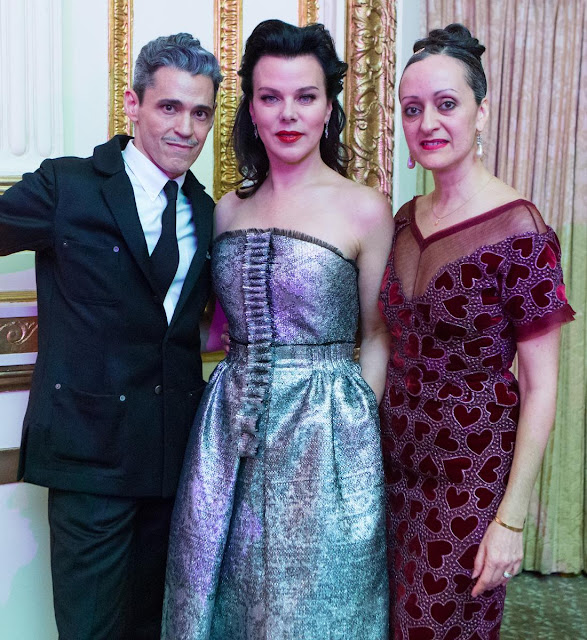 For additional and past blog posts on Isabel and Ruben Toledo click here.