Óscar Arístides Renta Fiallo best known to us as the great fashion designer Oscar de la Renta passed away on October 20, 2014 and was laid to rest today in New York. If you have been a long or even short time follower of this blog you might know by now that Oscar and his work were a topic of great admiration for One Style at a Time. Today I am back after a few weeks hiatus after the loss of my beloved father to pay tribute to another man who in fashion left a big mark.

Impossible to describe the genius talent of this master of design in just a few words. How do you describe his impeccable artistry? The best way would be to remember him through his magnificent work. Oscar de la Renta was a proud designer from Dominican Republic and his Latin roots, love for color and nature many times were sources of inspiration for his clothes. Since his passing on October 20th, there have been numerous articles written about his five decades of work and his impact in the world of fashion. His stomping grounds began in Madrid, Spain as he closely worked with designers like Cristobal Balenciaga and Lanvin-Castillo. There is no denying that the Spanish influence was still a part of his designs today. Through the years he has provided countless show stopping gowns for some of the most important women around the world. First ladies and A-list celebrities wore some of his most unforgettable pieces. To name just a few; Jackie Kennedy, Michelle Obama, Hillary Clinton, Laura Bush, Sarah Jessica Parker, Oprah Winfrey, Tina Fey, Amy Adams, Cameron Diaz and the list goes on and on. His most recent headline was dressing George Clooney’s bride to be Amal Alamuddin for their nuptials. What made him and his gowns so special and desirable? Pure elegance! He understood what women wanted to wear and he enjoyed dressing powerful women. No one understood the term ‘femininity’ better than Oscar. He never dissapointed season after season on and off the runway.

Personally, the loss of this legendary designer is significant. As long as I can remember and have had a love for fashion he has always been someone I highly respected. His global success was admirable but being Latina and hearing him speak about his Latin roots and culture with so much joy evoked such a high sense of pride. I was elated when in 2011 I had the honor of meeting him, conversing and hearing him sing to SJP at the Fashion Night Out event at his flagship store on Madison Avenue. Click here to relive the event. I left that evening with my own impression of Oscar. He was a man who was poised, elegant, a magnificent dresser but also kind and very approachable. In a room where friends like Barbara Walters stopped in, he was just as charismatic to the celebrities as he was to his fans and greeted everyone in the room with a handshake. So many have asked me what I think is Oscar’s legacy. I believe its the timeless elegance and beauty in fashion. He brought the fantasy to life through his masterpieces.

Every season during New York Fashion Week his show was on my ‘must see’ list. Watching him give his final bow at the end of each presentation was always a thrill after he had presented so many gems on the runway. Needless to say there will be a huge void going forward during fashion week. The house of De la Renta opens up a new chapter with their new creative director Peter Copping formerly of Nina Ricci.

On behalf of One Style at a Time we send our sincerest condolences to Oscar’s family, friends and staff members. Oscar you will be missed and remembered. Thank you for all your inspirational work and for leaving such a beautiful and glamorous mark in the world. RIP. 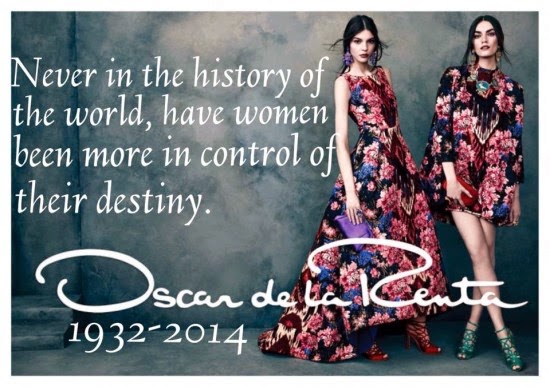